I am a Westfield native, through and through, and I now have the jacket to represent my hometown!

As part of its 350th birthday celebration, Westfield, Massachusetts, put on a race series where runners received a commemorative jacket upon the completion of five races. This series was a tricky one for me as I traveled a lot this spring and summer when most of the races took place. But as a native of Westfield—born and raised—I knew I needed that jacket, so I did everything in my power to make it happen!


Every year, I run Gordy's First Race to start off the New Year running, so signing up for that one was a no-brainer. It helps me stay pretty tame on New Year's Eve, and it gives me an immediate goal for the new year. I was so grateful that the weather was mild this year! It was great to catch up with my running friends and start my new year off right! Then, in February, I ran the Indoor Track All-Comers Meet at Westfield State College, which challenged me like no road race ever has! I'd never sprinted before, so I was surprised to discover how fast I could potentially be if I ever get my asthma under control for longer distances!


In June, I ran the Westfield Half Marathon just a couple weeks after my Chesterfield Gorge Ultramarathon, so I focused on maintaining a moderate speed throughout the hilly 13.1 miles. It wasn't my fastest half-marathon, but I'm pretty proud of the consistency of my pace, which I often struggle with.


Three races down and just two more to go! I was getting excited! I had planned on running one of the Monday night runs in Stanley Park sponsored by Empire One Running Club. With all my travel over the summer, I made a plan to run the first Monday in September so I could qualify for the jacket. The original postcard I had received—way back when—stated that the park runs ran through September. But when I went online on September 1st to check the race's start time, I discovered the Monday night races had ended in August!

I had worked so hard to make sure I could run FIVE races, and I needed that jacket. I emailed the series director, Vanessa Diana, right away and explained what happened. I even shared a screenshot of the postcard. I'm so impressed at how quickly she responded. She said they had sent out updated postcards. (I must have dismissed the second one.) But...then she informed me that a new race had been added to the series and there was still time to sign up! Phew! She saved the day! Thank you, Vanessa!

In September, I ran the Brown Bear Invitational 6k, which took us through my favorite woods in Stanley Park. I focused on speed as I hopped over tree roots and rocks and tried to keep up with all the 20-year-old college kids who left me inhaling their dust a half-mile in. It's humbling to watch an entire pack of runners disappear in such a short amount of time. I had to keep reminding myself: Sera, you're not 20 anymore. I'm quite proud of my time. I ran 9:41 minute miles, which is pretty speedy for me when running a trail race. And I'm super grateful to my boyfriend for cheering me on while I ran my heart out. It kept me moving! His picture of me crossing the finish line truly sums up the amount of effort I put into this race. I was dying!

Before I knew it, it was October. And that meant the final race of the series. And jacket pickup! Run Stanley took me on a different route through the woods of Stanley Park. It was a nice recovery run after running 18 miles the day before. Kids raced, dogs raced with their owners, and then us 5k runners raced. There was music blasting, and physical therapists gave out free pre- and post-race massages. And I was ever so grateful for the post-race apples, as I was still on the WHOLE30 and couldn't eat the typical post-race carbs. Those apples tasted divine! It was so wonderful to see my Westfield community all come together to celebrate Westfield's 350th birthday!

I love my jacket so much! I want to wear it everywhere. But what I love even more about this race series is that I revisited so many childhood memories as I explored the various streets, parks, and woods in my hometown—running by the very swing set my dad pushed me on when I was little, racing down the same streets my friends and I raced our bikes, trotting past my fourth grade teacher's home, plodding up the hill that eventually led to my first boyfriend's house. Each and every memory, even the sad ones, makes me proud to have such a strong history with my hometown.

This race series reminded me that Westfield is where I first learned about the world, both the good and bad, where I first fell in love and where my heart broke over and over again, and most likely, where I broke some hearts too. It's where I daydreamed of traveling far, far away and never coming back, and it's where I came back to raise my own son. And it's where I joined my very first running club, Run Your Health, where I found my love for running.

Westfield is where I call home, no matter where I reside. So I wear my jacket proud!

Have you ever ran a race series for a jacket? Share your story in the comments below!
at October 11, 2019

Covid-19 Quarantine Day 139: Where Have All the Masks Gone?

Even the trees are shocked! When the pandemic first started, right before we went into quarantine, Mike and I went to the supermarket a... 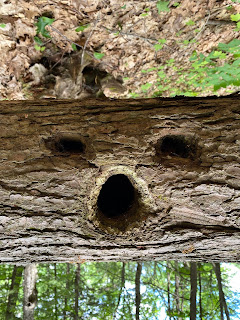