Gearing Up for Colder Months in Quarantine

Brrr. It's getting cold out there! Where has summer gone? It's getting harder to wake up early now that it's darker and colder in the mornings. But I can't deny how good it feels to breathe in the brisk air and stare at the colorful trees against the bright blue backdrop of the sky once I motivate myself to get up and get moving. Staying active during the colder months is like going to the gym after the shininess of New Year's resolutions wears off. It takes a lot to get yourself out there, but once you do, you wonder why you hesitated in the first place.

Since we're still in a pandemic, Mike and I talked about the importance of not staying cooped up inside all winter. In normal years, I always sign up for a few fall and winter races to keep me motivated to run, including trail and mountain races (like the Ghost Train Ultramarathon, or the "Movember on Mt. Tom Fun Run" to raise awareness for men's health). But all races have been discontinued. Likewise, we won't be able to socialize indoors at theaters or restaurants or gatherings with friends. What do we do? 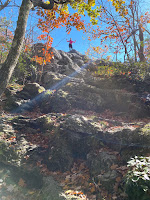 We decided to stick with what we do best: hiking and running. We also agreed to try snowshoeing come winter to spice things up. We went through our colder weather inventory to see what we already own. Then we went on a five-and-a-half hour hike on Mount Race, my favorite mountain in the Berkshires, to figure out what we still need to stay dry, warm, and safe outside during the fall and winter months.

While hiking, we paid attention to the changing landscape. Fallen leaves and muddy terrain after the previous night's rainfall made the trek slipperier than usual. Fortunately, Mike's aunt lent us her trekking poles to see how we liked them. Why have I never used trekking pokes before? Wow! They truly gave me "extra legs" as I maneuvered up and down muddy terrain, crossed rivers, and navigated boulders. I have terrible balance, so I will definitely be getting myself a pair of these. Once winter sets in, I'll be adding MICROspikes so I don't slip when walking and climbing on sheets of ice.

As for clothing, here is what we decided works best for the fall and winter months:

New England weather is finicky. The temperature can go from 48°F to 72° to 30° all in one day. It can be sunny, then cloudy, then windy with hail, then calm and balmy. Yes, we often have the four seasons all in one day. Weather definitely keeps things exiting. But no matter where you live, it's important to be prepared for the elements, especially on mountains. Mountains don't care if it's January or July; they have their own climate.

One thing I love about IllumiNITE clothing is that they're easily packable and lightweight. Even their warmer clothing doesn't feel bulky. Therefore, I love to layer a shortsleeve like their Mockingbird or Savannah Shirt underneath a warmer shell like the Ambition Hoodie or Packable Jacket for the fall months.

Once that bitter winter weather sets in, I exchange my Packable Jacket for the Tahoe Performance Softshell Fleece. It protects me against the elements while still allowing me to move freely, whether I'm running on the road or climbing up the boulders of a mountain.

The women's Satellite Running Tights and men's Mercury Running Tights keep us dry and warm during the early autumn months. I love how IllumiNITE tights can be layered beneath hiking pants, running shorts, or sweatpants for added warmth and protection. They also prevent chafing and wick away moisture. I also recommend wearing wicking underwear made specifically for running or hiking. It makes a world of difference in comfort level.

There's really nothing worse than sweating through your layered clothing only to become chilled to the bone. That's the type of bitter cold that sits inside you for hours. So, when the weather turns damp and cold, the Windbrite Pant, which is windproof, prevents windchill from settling in. 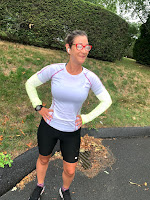 I don't know what I would do if I didn't have my go-to IllumiNITE accessories. They all make my life so much easier because they prepare me for anything.

A super fun accessory that is also practical is my pair of IllumiNITE Sleeves. When it's a tad chilly, but I know I'll heat up as I run, I wear a shortsleeved tee with my detachable sleeves. They easily stow away in a pocket if I get too hot, but add just the right amount of warmth and brightness on chilly and/or damp days.

And I'm totally obsessed with accessories for my head! My Multi-Wrap has multi-purposes. I can use it as a hat, double it up to create a face mask for when we're passing people on the road or trail, or use it as a buff to keep sweat out of my eyes and bugs out of my ears (especially during pesky spring and fall months when the insects are especially buggy!).

When I don't want full coverage, I really love the thicker IllumiNITE headbands because they still keep sweat out of my eyes and bugs out of my ears. Some even come equipped for ponytails (the Ambition Hoodie is also perfect for ponytails!)

For our early morning walks, I switch out the elaborate head coverings for my 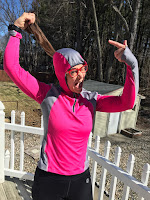 Synergy Hat. I can keep my hair down while wearing it, and it keeps my head warm—and visible!—while we walk through our neighborhood.

But as the months get colder, I exchange these head coverings for the Cold Weather Unisex Hood. It's so versatile! You can rearrange it to either cover your head, mouth and nose, and neck; Or, your head and neck; Or, just your neck, depending on how hot or cold you get. It's especially easy to pull down the face covering for a quick snack break without any complications.

IllumiNITE's Velocity Mittens keep my hands dry and warm while also allowing me to use my phone—gotta capture our amazing adventures on camera. Though, come winter months, I will need warmer gloves such as their Second Skin Gloves or Three-In-One Mitten.

I spoke with our friends at IllumiNITE to see what they recommended for warmer gear for the colder months, and they gathered some of their best products for us. Our shipment just came in, and I can't wait to see what we got! Stay tuned for more. In the meantime, check out IllumiNITE for all your reflective athletic wear needs, and use my discount code Sera15 for 15% off your order!

I'd love to hear your must-have gear for fall and winter! Please share in a comment below!

Virtual Races: A Reminder I Didn't Know I Needed

Every year, I plan out my races to keep myself motivated and moving. I sign up for my fave (fun!) races, such as The Westfield Flat Fast 5k and the Hot Chocolate Run 5k for Safe Passage, and I choose one or two favorite long distance races, such as the Cape Cod Marathon or Ghost Train Ultra Marathon, and then I sprinkle in a few races I've not tried before to spice things up. Destination races are my favorite, so I try to incorporate those when possible.

But this year, all races were cancelled due to the pandemic. I had signed up for the Green River Marathon, a one-way marathon from Vermont to Greenfield with a 1,450 foot overall drop in elevation (to make up for making Mike run his first marathon ever in Greece where the elevation gain was 1,150 feet!). And I had also signed up for the Ghost Train Ultra Marathon again, where I planned on running 45 miles in two days (30 Saturday; 15 Sunday). I told Mike that we should just train anyway, do the miles on our own, but it's been a real struggle getting high mileage in.

Yes, we've been active every day, especially since we created our accountability schedule. But our long runs have plateaued at about ten miles...wah, wah, wah! And here it is October already, and I haven't run one marathon yet. I'm usually on marathon number two (or even three!) for the year by now. I feel the negative difference in my body and my mood, and I don't like it!

So the other week, I told Mike that we had to run a half marathon. No matter how long it took, we were

not stopping until we hit 13.1 miles. I was slow, real slow, but I just kept moving one foot in front of the other, and before I knew it, we were finished! It definitely helped that the sky was blue because it was cold! A mere 41 degrees. Thank god we wore our IllumiNITE pullovers AND gloves to keep us warm. But it gave me a sense of accomplishment. We may not be marathon ready, but we're halfway there.

I had planned on signing up for the Womxn Run the Vote relay race, where proceeds went to Black Voters Matter, but time got away from me. By the time I went to registered, they had hit their 10,000 athletes capacity! Whoa! I had no idea virtual races capped participation. Mike and I still logged about 35 miles that week, and I am still donating money to Black Voters Matter because it's such an important cause! But missing the sign-up bummed me out! I didn't realize how much I missed my running community until I missed out on an amazing race opportunity for a charitable organization.

So, to keep our momentum going, Mike signed us up for the Running from 2020 virtual race. The finisher shirt definitely captures how we feel about this year. Then, on October 3, Mike asked me what day it was. Okay, okay, he didn't ask; he told me: Race Day! But I needed my total Mean Girls moment! Don't judge! Anyway, I was not feeling the race whatsoever! But I knew I couldn't let him down, and I also wanted that shirt! So I pushed my grumbling deep down, and we set off. Once Mike passed me, my racing instincts kicked in and I ran harder than I've been running most days. I'm so proud to say that I ran nonstop. I even sped up with each mile.

I tried my hardest to catch Mike, but he's just too fast for me. He won by four minutes! Yowza he's fast! But it was so much fun, and it made me realize how much I love racing.

I truly believe in races that raise money for charitable organizations, so that's priority for me right now. I may not get my marathon in this year, but I plan on staying active throughout the winter. I'm hoping that the annual Hot Chocolate Run that I run every year goes virtual this year. Proceeds go to Safe Passage, an organization that helps "families achieve safety, build justice and rebuild their lives in the wake of domestic's violence."

What virtual races have you done this year?

What virtual events are you looking forward to?

Perhaps we can run one together in the virtual world.

Check out the styles we're wearing and use my discount code Sera15 for 15% off your entire IllumiNITE order.

Gearing Up for Colder Months in Quarantine 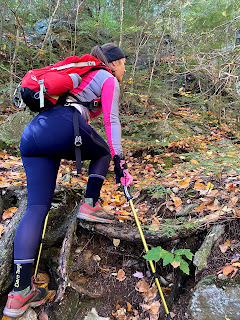