If you told my 2015 self that Sera Rivers would be running all over the world, running thirty-plus miles—in the woods!—she'd tell you: "You've got the wrong girl. I HATE running. And I most definitely HATE the woods."

But here she is...uh, I mean, here I am, an ultramarathoner! And I've already completed four ultras in just eight months—on two continents, thank you very much. And now I'm gearing up for my next race: a marathon in Greece. Not just ANY marathon: The official route of the legendary Pheidippides who, in 490 BC, ran from Marathon to Athens to share the news that the Greeks had won the battle against the Persians.

This running thing is clearly not a phase like I first thought it was; it's my life. And with so many people asking about all my adventures, it's about time I share them!—Especially now because I've got exciting news to tell.

I am now a running ambassador for IllumiNITE—a family-owned, Massachusetts-based apparel company (my home state! Woot!) that creates sportswear and accessories with an all-in-one reflective ink that increases visibility and safety—whether you're running, cycling, rollerblading, or even walking your pet at night.

I'll admit, I was a bit scared to try out new clothing for the first time at an ultramarathon (33 miles) in the wilderness of a foreign country. Every runner knows you don't try new things at a race. But I loved IllumiNITE's styles, and I wanted to look great in Scotland, especially since I was one of just a handful of Americans running the Kintyre Way Ultra. And a few people I knew who wore IllumiNITE swore by their clothing, so I gave it a shot.

What I thought would take about 7 hours to finish, took 8 hours, 54 minutes, and 34 seconds (that's another story!), but man, I am so relieved I had IllumiNITE gear. It was cold first thing, so the featherlite jacket kept me warm but was easily stowed away in my hydration vest as soon as the weather warmed up. I couldn't even tell I was carrying it (it really is so lightweight!). My body stayed cool and dry the whole 9 hours, despite the sun beating down on me (surprising for Scotland in May, I know), and the reversible headband kept the sweat out of my eyes! A definite added bonus! Where has IllumiNITE been all my running life?! I'm already an addict.

But don't take my word for it. Try IllumiNITE for yourself. Follow my blog for an upcoming discount code, giveaways, and more! You'll learn about all the places I've been so far, and discover all the places I plan to go. I'll also share training and nutrition tips I've learned along the way, as well as my journey to finding balance between running and writing and living the ultra life!

And I also want to hear from you! While I'm technically on social media, I've not REALLY seeing what's happening with you all on social media! I've been so busy!  Please comment below with something you're excited about—doesn't have to be running related!

Foggy, rainy morning for our run; but we stayed bright  and dry in IllumiNITE's Colorado Jacket and Squall Jacket Marathon Training has... 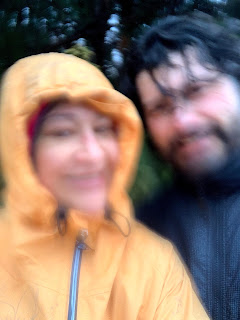