Virtual Races: A Reminder I Didn't Know I Needed

Every year, I plan out my races to keep myself motivated and moving. I sign up for my fave (fun!) races, such as The Westfield Flat Fast 5k and the Hot Chocolate Run 5k for Safe Passage, and I choose one or two favorite long distance races, such as the Cape Cod Marathon or Ghost Train Ultra Marathon, and then I sprinkle in a few races I've not tried before to spice things up. Destination races are my favorite, so I try to incorporate those when possible.

But this year, all races were cancelled due to the pandemic. I had signed up for the Green River Marathon, a one-way marathon from Vermont to Greenfield with a 1,450 foot overall drop in elevation (to make up for making Mike run his first marathon ever in Greece where the elevation gain was 1,150 feet!). And I had also signed up for the Ghost Train Ultra Marathon again, where I planned on running 45 miles in two days (30 Saturday; 15 Sunday). I told Mike that we should just train anyway, do the miles on our own, but it's been a real struggle getting high mileage in.

Yes, we've been active every day, especially since we created our accountability schedule. But our long runs have plateaued at about ten miles...wah, wah, wah! And here it is October already, and I haven't run one marathon yet. I'm usually on marathon number two (or even three!) for the year by now. I feel the negative difference in my body and my mood, and I don't like it!

So the other week, I told Mike that we had to run a half marathon. No matter how long it took, we were

not stopping until we hit 13.1 miles. I was slow, real slow, but I just kept moving one foot in front of the other, and before I knew it, we were finished! It definitely helped that the sky was blue because it was cold! A mere 41 degrees. Thank god we wore our IllumiNITE pullovers AND gloves to keep us warm. But it gave me a sense of accomplishment. We may not be marathon ready, but we're halfway there.

I had planned on signing up for the Womxn Run the Vote relay race, where proceeds went to Black Voters Matter, but time got away from me. By the time I went to registered, they had hit their 10,000 athletes capacity! Whoa! I had no idea virtual races capped participation. Mike and I still logged about 35 miles that week, and I am still donating money to Black Voters Matter because it's such an important cause! But missing the sign-up bummed me out! I didn't realize how much I missed my running community until I missed out on an amazing race opportunity for a charitable organization.

So, to keep our momentum going, Mike signed us up for the Running from 2020 virtual race. The finisher shirt definitely captures how we feel about this year. Then, on October 3, Mike asked me what day it was. Okay, okay, he didn't ask; he told me: Race Day! But I needed my total Mean Girls moment! Don't judge! Anyway, I was not feeling the race whatsoever! But I knew I couldn't let him down, and I also wanted that shirt! So I pushed my grumbling deep down, and we set off. Once Mike passed me, my racing instincts kicked in and I ran harder than I've been running most days. I'm so proud to say that I ran nonstop. I even sped up with each mile.

I tried my hardest to catch Mike, but he's just too fast for me. He won by four minutes! Yowza he's fast! But it was so much fun, and it made me realize how much I love racing.

I truly believe in races that raise money for charitable organizations, so that's priority for me right now. I may not get my marathon in this year, but I plan on staying active throughout the winter. I'm hoping that the annual Hot Chocolate Run that I run every year goes virtual this year. Proceeds go to Safe Passage, an organization that helps "families achieve safety, build justice and rebuild their lives in the wake of domestic's violence."

What virtual races have you done this year?

What virtual events are you looking forward to?

Perhaps we can run one together in the virtual world.

Check out the styles we're wearing and use my discount code Sera15 for 15% off your entire IllumiNITE order.

Reset, Reflect, Recalibrate: This is 2021

Our kitchen whiteboard keeps our goals and progress front and center It's 2021, and I'm sure I'm not the only person who is grat... 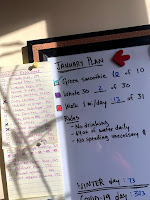